The Origins Of The Ball in Football

The ball used in football is one of the oldest pieces of sporting equipment in the world.

Historians believe that its origins date back thousands of years to ancient civilisations that enjoyed games that are not that unlike the one that we dote on in the modern age.

Although it has undergone countless redesigns and iterations, the ball used in the world’s most popular sport has a long and truly fascinating history that paints a picture of just how long mankind has had a deep passion for the game of football.

Where The Ball Originated

It’s believed that humans have been kicking a ball or something similar to a ball for many thousands of years. Even the South American natives made use of a ball-like object for many of their games.

Modern football balls make use of rubber as their main material, but this material would not be used for centuries, with today’s manufacturing methods being the only practical way of making the ball as we know it.

According to historical information, balls made by the ancients would often have consisted of cow or pig bladders, skulls of both animals and humans, as well as stitched cloth. Tsu Chu was a game invented by the ancient Chinese that made of animal skin, and the ball itself would be pushed through two poles in order to score a goal, very much like the game of today.

The Ancient Egyptians, too, had a form of the game, and it’s believed that the rules were very similar to the ones that we have today. The Romans and Greeks had versions of their own, except these often involved carrying the ball in their arms, making them much more closely related to rugby than to football. 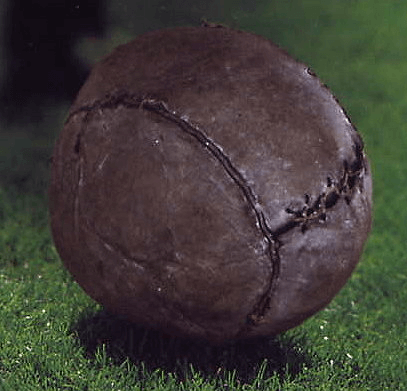 By the time that the Dark Ages had come around, football was a game enjoyed throughout much of Britain, usually by local communities.

They would fashion the ball out of a pig bladder that would be taken after the winter harvests. The game in question involved keeping the ball up in the air for as long as possible, but this would later change down the line as football continued to evolve.

Part of the changes were directly related to the many bans that were imposed on the sport by both the monarchy and government officials, but it remained a popular pastime among the common people regardless.

Charles Goodyear was the first person in history to patent the rubber that would become the standard material for the covering of the ball. Before this, the balls themselves were almost never spherical, but with the new material, it allowed for a defined shape to be made.

Despite this, it would take almost another 200 years before rubber became the more common material to use for the balls. In today’s world of the latest online gambling casino and video games, the balls used in football are usually made out of synthetic materials, giving them improved durability on the field.

This entry was posted in Football and tagged Football, history. Bookmark the permalink.